A trip down your local health food store’s wellness aisle offers an array of vitamins and supplements advertising optimal health benefits. The dietary supplement industry is at an all-time high with 77 percent of U.S. adults reporting they consume dietary supplements, according to a new CRN Consumer Survey.

One of the many dietary supplements on the market is spirulina. It’s a blue-green algae and spiral-like cyanobacterium that represents an optimal diet staple in humans and has low environmental impacts. The super food is available in powered, tablet and raw forms—it’s even added in foods like pizza crusts.

Cyanobacterium is the oldest known fossil (about 3.5 million years old) and the first bacteria that figured out how to photosynthesize. According to the Wiley Online Library, Chadians have consumed this microalgae as food for centuries in Central Africa.

“It’s a very special organism,” said Manuel Perez, a farmer’s market seller for GoSpiral Farms here in Southern California. “Spirulina has the smallest footprint of anything you can eat, ever.”

GoSpiral Farms is a family-owned and operated hydroponic spirulina farm in Oceanside, Calif., which is the northernmost city of San Diego County. Paul Cathcart, GoSpiral Farms’ owner and chief operator, has changed the spirulina market from just a supplement to a vegetable.

“We’re developing a spirulina fettuccini, ice creams, protein bars,” said Cathcart. “It’s really about scaling this up so we’re not just a drop in the bucket but actually making a conscious contribution to the overall nutrition and sustainability in America.”

“We are trying to build a food supply not just for now, but for the future,” added Cathcart.

According to Perez, the company reuses all of its farm-grade water and has no water run-off from the production of spirulina. The Vista Irrigation District supplies the water for the farm, which is partially sourced from Lake Henshaw or imported from the Colorado River and Northern California.

“During the summer months, spirulina can double its own weight in a day,” said Perez. “So you have an extremely productive, nutrient-dense vegetable that with two tablespoons can deliver all the nutrients that someone really needs.”

The health effects spirulina can have on humans include cancer prevention, lower cholesterol and allergic rhinitis treatment studies show.

According to the Journal of Medicinal Food, spirulina contains up to 70 percent protein and has essential nutrients like vitamin B12, K1 and Iron. Spirulina lacks structured cell walls, making it an easily digestible vegetable.

GoSpiral Farms supplements its spirulina with nitrogen, phosphorus and potassium. Organic seaweed is added to the spirulina for increased micro-nutrients. This also ensures a neutral flavor that doesn’t have the unpleasant algae aftertaste.

According to Cathcart, his company is building an indoor growth facility designed to produce twenty thousand pounds of spirulina per month. The expansion will help Cathcart and his team grow spirulina year-round and meet the demand of nutritious foods across the country. 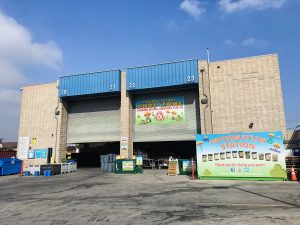