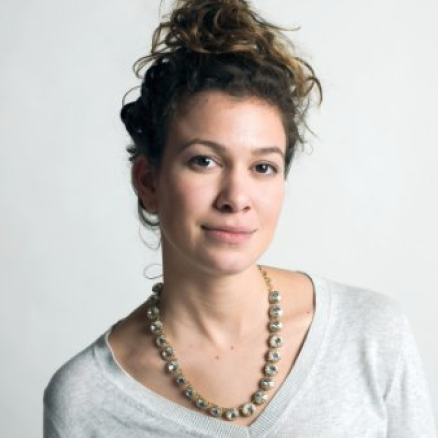 San Fernando Valley, Calif. — A light mist sprays when the wind kicks up creating a cool, wet breeze off the L.A. Aqueduct Cascades. White water flows down the open aqueduct which is visible from the Balboa Bridge above Highway 5 in the San Fernando Valley. Roughly a third of Los Angeles’ water supply travels 338 miles through the L.A. Aqueduct from the Owens Valley intake in eastern California, according to the Los Angeles Department of Water and Power (LADWP).

The Owens Valley is an arid graben flanked by the Sierra Nevada to the west and the Inyo Mountains to the east. The City of Los Angeles holds the water rights in the Eastern Sierra Nevada and has done so for more than 100 years. This ownership includes 314,000 acres of land in the Owens Valley, which continues to cause one of the longest water disputes between Los Angeles and the communities within Mono and Inyo Counties, including the Big Pine Tribe. This “water war” was popularized in the classic 1974 film “Chinatown” but has since left the urban consciousness until recent awareness of climate change took hold again.

The transition hasn’t always been easy.

“For nowhere in the Americas is a valley bounded on both sides by such towering peaks.”

History of the L.A. Water Wars

Prior to 1905, the City of Los Angeles depended on the L.A. River for its water supply. As the population grew exponentially, the City began to search elsewhere for valuable water sources. William Mulholland, Fredrick Eaton and J.B. Lippincott were prominent engineers and businessmen who traveled throughout California to find a viable water supply for Los Angeles. Mulholland found Payahuunadü, the “Land of the Flowing Water,” and the City began buying the private land for its own use.

The engineers settled on the development of the first L.A. Aqueduct (1913), which freely siphoned water from the Owens River, drying up the surrounding land in its wake. Tensions between LADWP and Inyo County flared in 1970 once the second aqueduct was completed.

The total water delivery capacity of the second L.A. Aqueduct system increased by approximately 50%, according to LADWP. This urban advancement led to years of water depletion from the Valley’s watersheds and legal battles between the affected indigenous communities and LADWP.

Protecting the Paiute and Shoshone people, who were the original stewards of the once fertile Owens Valley and Eastern Sierra region, is now part of LADWP’s Long-Term Water Agreement (LTWA).

The aqueduct relies on the snowmelt runoff from the Sierra Nevada and groundwater from the Owens Valley. Water flows through the aqueduct by gravity alone, which was engineered to travel the 233-mile stretch of pipeline

A major requirement of the agreement is for LADWP to provide an operations plan every April to the Inyo County Water Department (ICWD). The 2020-2021 operations plan delivered last month details a significant increase in the pumping forecast, which many people oppose including concerned L.A. residents.

Constituents from L.A. and Owens Valley voiced their concerns during a standing Inyo County/L.A. committee meeting on Friday, May 15. The committee read hundreds of public comments mostly addressing the proposed groundwater pumping increase to 93,000 acre-feet over the next year. It’s a noticeable spike from the 2019-2020 low-pumping year of only 53,200 acre-feet. L.A. Aqueduct Manager Clarence Martin addressed the plans via Zoom.

“The planned pumping range that we have right now is between 75,000 acre-feet and 93,000 acre-feet. And I just need to point out that even at the high end of this at 93,000 acre-feet of water, that is still 50 percent of what is allowed in the Long-Term Water Agreement.”

Richard Harazick, LADWP’s senior assistant manager, spoke about the increased efforts L.A. County has made to rely on its own local wastewater [runoff and stormwater] capture while decreasing individual consumption habits. Harazick says the current average amount of individual water use is 104 gallons per day, which is down from 161 gallons [per day] 15 years ago.

Los Angeles County passed Measure W in November 2018, a parcel tax on nonground water surface areas such as concrete driveways. The measure, which took effect last July, aims to capture rainwater, reduce polluted water runoff, and recycle wastewater for use during seasonal droughts. Of the parcel tax’s revenue, half will go to funding regional watershed projects, 40% to municipal and local priority projects, and 10% to the Los Angeles Flood Control District for administration and educational programs, according to the Safe Clean Water program.

“This next fiscal year we will begin using 100 percent of the wastewater as recycled water from the San Fernando Valley’s Donald C. Tillman Water Reclamation Plant,” said Harazick.

The local wastewater from households, agriculture runoff and stormwater will be recycled and reused for irrigation of landscapes in L.A. County, says Harazick.

“We’ll have thousands of acres-feet of water to reuse within the [San Fernando] Valley, so we are making real efforts to continue to use our water efficiently in the City of Los Angeles,” said Harazick.

Four million Los Angeles residents currently depend on the Owens Valley for its water. Watershed management and restoration is essential to the survival of the Owens Valley and Mono Basin. Angelenos are beginning to recognize the severity of water scarcity due to historic droughts sweeping across Southern California over the past decade. Data collected from the U.S. Drought Monitor shows the period of 2012 to 2016 as the driest years with an average rainfall of 7.74 inches, 50% below normal rainfall. LADWP imported less water from the Owens Valley during those drought years.

Where Does Your Water Come From? 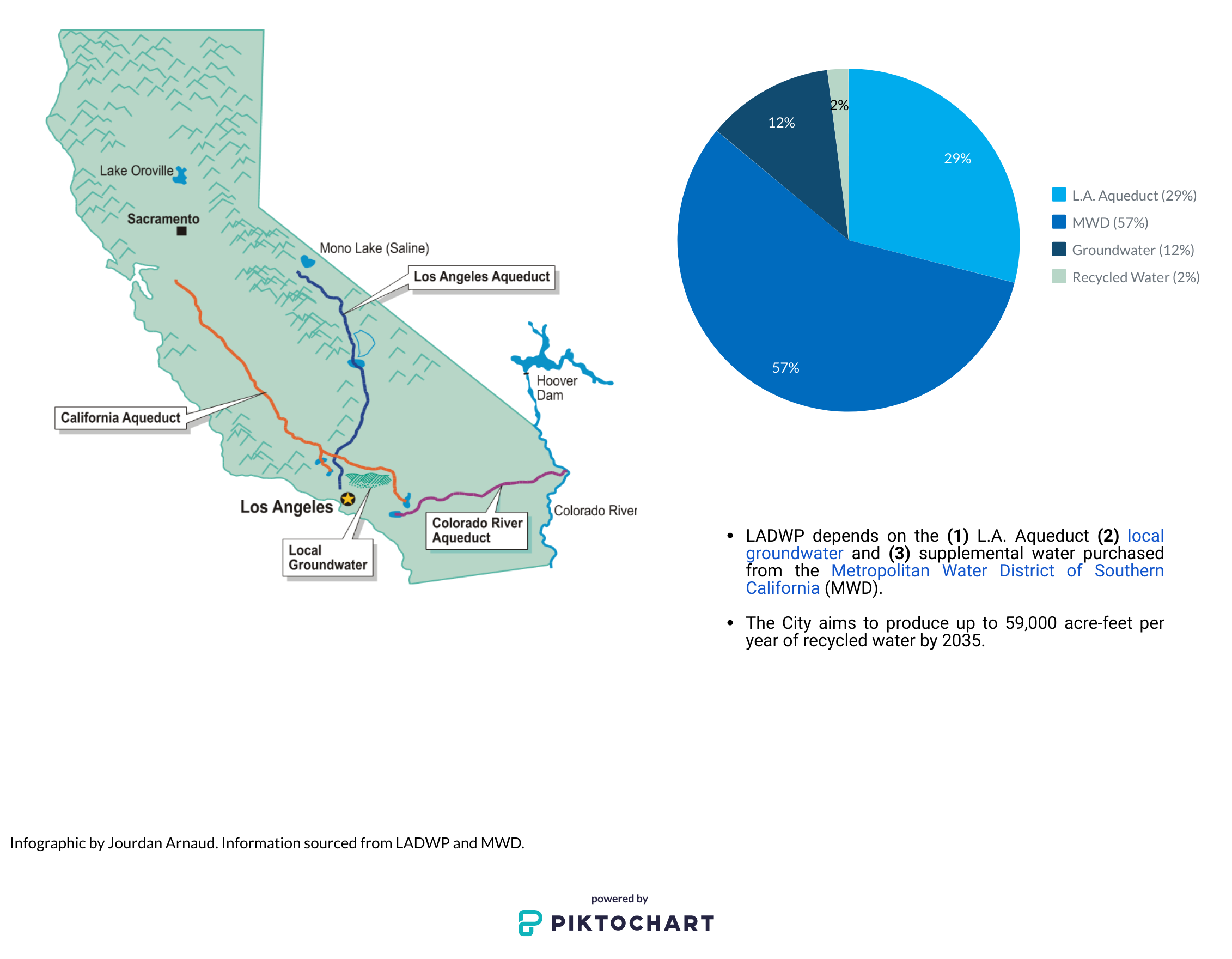 In 2015, Bode hiked the 338-mile aqueduct system from the Cascades in Sylmar, Calif. carrying a 60-pound pack of film and camping gear. During her 65-day journey, Bode documented the sunbaked landscape underneath the pipelines and spoke with the people of Inyo County along the way.

“A lot of people who are impacted by the water exports from the L.A. Aqueduct refer to people in the DWP as colonizers,” said Bode.

“You’re taking a company that has a whole floor dedicated to its legal services and putting them against people that live in rural California and don’t have access to those kinds of resources. It’s basically like a David and Goliath-type situation.”

Bode discovered the L.A. Aqueduct while on a camping trip near the Mono Lake Basin. After seeing a parked LADWP truck, Bode wondered why an LADWP employee would drive more than 300 miles northeast of Los Angeles. She found out that LADWP owns the land in Owens Valley including the Mono Lake Basin. “The Longest Straw” helps Los Angeles residents realize that water conservation efforts are vital to the health of the environment and the people of Southern California, Bode says.

“The decision to hike the Los Angeles Aqueducts and Mono Extension really didn’t have much to do with hiking. Yes, I love hiking as much as the next Angeleno, but it had more to do with the fact that most Angelenos have no idea where their water comes from,” said Bode.

Bode lives in the L.A. Eco-Village, which is an intentional community that advances social, economic and ecologic awareness through permaculture principles and community-minded living. Each residential building is situated around a communal outdoor space that relies on a graywater system to water its fruit trees and native plants.

The village recently installed rain tanks as another way to conserve water and reuse it to irrigate the fruit and vegetable gardens on the property. The communal outdoor kitchen includes a graywater washer that feeds the fig tree, grapevines and goji berries, says Bode. Residents are expected to use graywater-safe soaps that are low in salts and boron-free.

“An ecovillage closes the waste to resource loop. Unfortunately, nowhere in the industrial world that I know of is there a fully manifested urban ecovillage,” said Lois Arkin, founder and executive director of CRSP, the initial developer of the L.A. Eco-Village.

“We are all just aspiring in that direction. Here in L.A. all you have to do is breathe our air to know how far we have to go to close those loops.”

Bode and Arkin are a small representation of the many allies seeking justice for the indigenous people of Owens Valley. They have altered their consumption habits to work toward a more sustainable and regenerative lifestyle in America’s second-largest city.

“Over 80 percent of the water we use and drink in Los Angeles is imported from at least 200 miles away…from the Colorado River, The San Joaquin Delta or the Owens Valley and Mono Basin. Most people, unaware of this fact, tend to have an “outta sight, outta mind” mentality about their water sources, said Bode.

“By hiking the aqueduct, I am guiding people on the journey of one of Los Angeles’ water sources, and along the engineering prowess of one of the first long distance water moving mechanisms of its kind.”

What's Next for the Owens Valley Water Supply?

According to LADWP, about half of LA’s historic water supply is now left in Mono and Inyo Counties for environmental remediation and other conservation commitments. The farmers, cattle ranchers and people of Owens Valley acknowledge its history with the City of Los Angeles. They continue to monitor the watershed after decades of depletion in hopes to return it to its natural state.

“I want to first off thank all the Los Angeles citizens who have spoken up in solidarity with the folks of Payahuunadü, the place of flowing water in Owens Valley,” said Hohag.

“Up here in Inyo and Mono County, I think it’s very important that we have a greater voice. I want to echo everyone else’s comments regarding tribal consultation being imperative, that your policies match your practice, and that we utilize our intelligence and our technology and our insights that are available to us today. We do not want to repeat the mistakes of the past and hope that we can live the next 100 years in a good way,” said Hohag.

The proposed 2020-2021 pumping plan set by LADWP is currently in review. A decision on the exact groundwater pumping plan will be reached by the end of this month. Follow this developing story by visiting LADWP and the Inyo County websites for updates on the operational plans.

Stay Updated on This Story

Editor’s Note: I want to thank everyone who was extremely generous with their time via interviewing, emailing and/or calling, which helped me research this story. For my first assignment back in September, I wrote about LADWP’s LACI campus. I had no idea how much I would learn after publishing that story. Over the past year, I’ve talked to so many people who are working to restore our urban environments through sustainable programs in Los Angeles and beyond. In particular, I would like to mention Samantha Bode (The Longest Straw), Gretta Treuscorff (The Huntington Gardens), Cara Hanstein (The Huntington Gardens), Brianne Zehm and Pierre Mainguy (Community First), Kreigh Hampel (Burbank Recycling Center), Amy Hammes (Burbank Recycling Center), Lois Arkin (L.A. Eco-Village), Elin Ljung (Mono Lake Committee), and Teri Red Owl (Inyo Water Committee). I have a better understanding of being a Los Angeles resident and feel more connected to the community here. It’s extremely important to stay engaged, and take care of our limited resources as our climate changes.