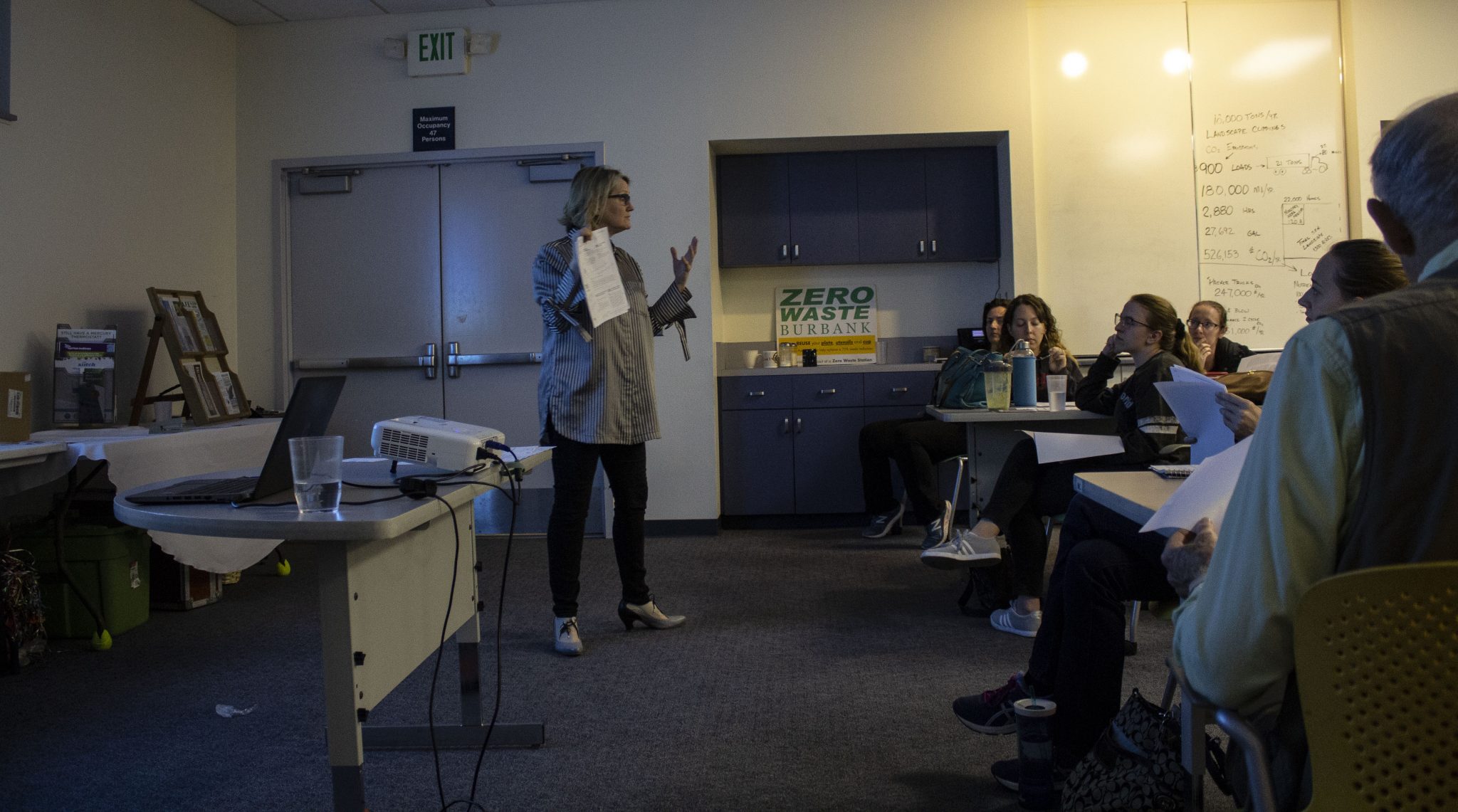 A group of 25 volunteers, mostly women, met at the Burbank Recycling Center for a bi-monthly Waste Warriors training class. Amy Hammes, a recycling specialist, is one of the two leaders who runs this community program in Burbank, Calif.

The Waste Warriors, formerly known as the Master Recyclers, includes a series of eight classes which educate volunteers on the six Rs of waste reduction—Rethink, Refuse, Reduce, Reuse, Recycle and Return. The goal is to create community ownership and spread awareness about the waste crisis in the United States.

Municipal recycling centers across the U.S. have seen a drastic decrease in the recycling market since China enacted its “National Sword” Policy in January 2018. For decades, the U.S. exported 70% of its discarded plastics to China, the world’s largest importer of scrap plastics. Much of what the U.S. thought was being recycled and reused in China was in fact discarded due to the high contamination and low-quality plastics. China’s ban has forced local governments and waste processors to look elsewhere for disposal, according to the Energy & Commerce Committee.

The Energy & Commerce Subcommittee on Environment and Climate Change recently held a recycling meeting led by Chairman Frank Pallone, Jr. (D) of New Jersey. The committee memorandum stated, “The Chinese ban could displace as much as 111 million metric tons of plastic waste (which otherwise would have been exported to China) by 2030. In the absence of new waste management practices, much of that displaced waste will likely end up in landfills.”

Hammes aims to educate the Waste Warriors about changes in the recycling markets so they can become more informed consumers. As a former member of the California Product Stewardship Council she stressed the power of consumer choice and Extended Producer Responsibility (EPR), a strategy which places responsibility for end-of-life product management on the producers instead of the general public.

“Democracy is not a spectator sport,” said Hammes.

“You don’t have to run for office or be the crazy person at the city council meeting always causing havoc, but a simple phone call matters,” said Hammes.

China’s Sword Policy caused a plastic market slump, and as of 2019, the center only takes PET #1 bottles, high-density polyethylene (HDPE) #2, and #5 plastic containers. Aluminum cans, metal scraps and glass bottles remain at a stable market value and are highly recyclable, according to the Energy & Commerce Committee.

Hammes believes the Waste Warriors program has a ripple effect in spreading information about the plastic and waste problem. Her goal is to make consumers understand the extraordinary amount of materials, production and fossil fuels required to make disposable items. Calling on State and Federal officials to advocate for better policies and regulations for climate-related issues.

Shea Smith is one of the volunteers going through the Waste Warriors program and works for a personal-care product company, BeautyCounter. During the workshop, Smith said one of the company’s pillars is advocacy and shared that it only takes 20 people calling, texting or writing in to their Federal and State representatives office for it to go on the meeting agenda.

“With all of this information we’ve been giving you, yes, it’s upsetting and overwhelming and angering but it feels good to know there are other people around you that care,” said Hammes.

The Waste Warriors volunteers will graduate from the program at the end of March 2020.